We are pleased to announce the Save Bees and Farmers petition successfully exceeded the target of 1.15 million signatures! This is an historic achievement and we would like to thank all those who participated. It is with a collective effort that we have reached this success. Now we move forward in the next steps to secure a pesticide free and bee friendly Europe. With this, we will keep you updated.

Many thanks to you all,

Friends of the Earth Malta 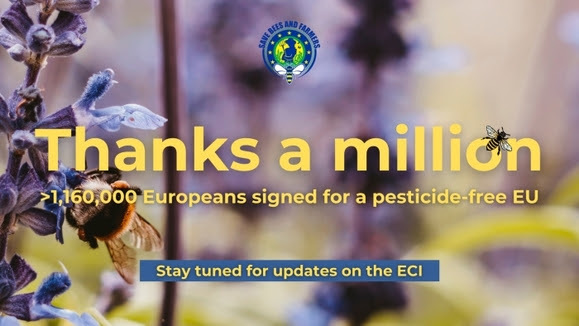 Pushed by the determination of citizens, Save Bees and Farmers has nearly reached its target. 1.13 million signatures and counting…

On World Bee Day, back on the 20th May, Friends of the Earth Malta called upon all residents of Malta to sign the European Citizens Initiative (ECI) Save Bees and Farmers petition. There was, and still is, an urgent call to protect bees, secure ecosystem health, restore biodiversity and to support farmers in the transition to agroecology[1].

This seemed like a monumental task given the fact that only 6 of the 108 previously launched ECIs have been successfully validated by the European Commission. That is less than 6%. Furthermore, in order for the ECI to be accepted by the European Commission, the petition must reach a minimum of 1.15 million signatures. This accounts for an invalidity rate of 10-15%. Save Bees and Farmers was no small task.

On top of all that, the current Covid-19 situation presented another barrier to push through. As Sonia Conchon, from the Save Bees and Farmers office explains:

“The Covid situation has made this campaign very difficult due to the lack of visibility as there were no public events during most of the campaign. Reaching the million finishing line therefore truly reflects the determination of citizens, for this second anti-pesticides ECI”.

Yet despite all these hurdles, European citizens have raised their voices and come together to collective challenge synthetic pesticides that are destroying our pollinators. Together, we have reached 1.13 million signatures. This is the last push home. Friends of the Earth Malta along with the rest of Europe are calling out for those last few signatures to meet our 1.15 million target by the end of tonight to become the 7th successful ECI. An historic success.

This is a story of solidarity as Europe collectively takes steps towards nature-friendly farming practices. Save Bees and Farmers is asking for:

This is the last day to protect our bees and people’s health, restore biodiversity and support our farmers. Sign the petition here: https://foemalta.org/beesaver

1 The European Citizens Initiative (ECI) Save Bees and Farmers gathers over 200 organisations throughout the EU. An ECI is a tool of participatory democracy in the EU that aims at collecting over 1 million validated signatures throughout the Union in order to trigger a political and democratic discussion in the European Commission and the European Parliament around the demands of the citizens. Our demands are 1. To phase out the use of synthetic pesticides by 2035, 2. To restore biodiversity in agricultural areas and 3. To support farmers in the transition towards agroecology. Our campaign has collected up to now around 600 000 signatures and will run until 30 September 2021.