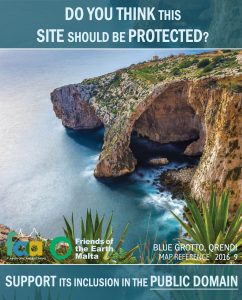 Friends of the Earth Malta and Flimkien ghal Ambjent Ahjar would like to thank the 5500 citizens who voiced their support in having 24 sites* protected under the public domain act.

Notwithstanding the fact that the public consultation took place in the middle of summer, the overwhelming response clearly shows that Maltese people value nature and would like to see that these vast stretches of land and sites of historic heritage that contribute to the public’s well-being will be provided a further layer of protection to ensure they are not only maintained and preserved today, but safeguarded for generations to come.

The public consultation period is now over and the proposals will be forwarded with recommendations in an Annual Report to the Minister for Lands, to be considered by Parliament after it reconvenes from summer recess.

The ENGOs hope that the support and comments submitted through this initiative will send a strong signal to parliament which will hopefully approve the protection of all the sites on the list.