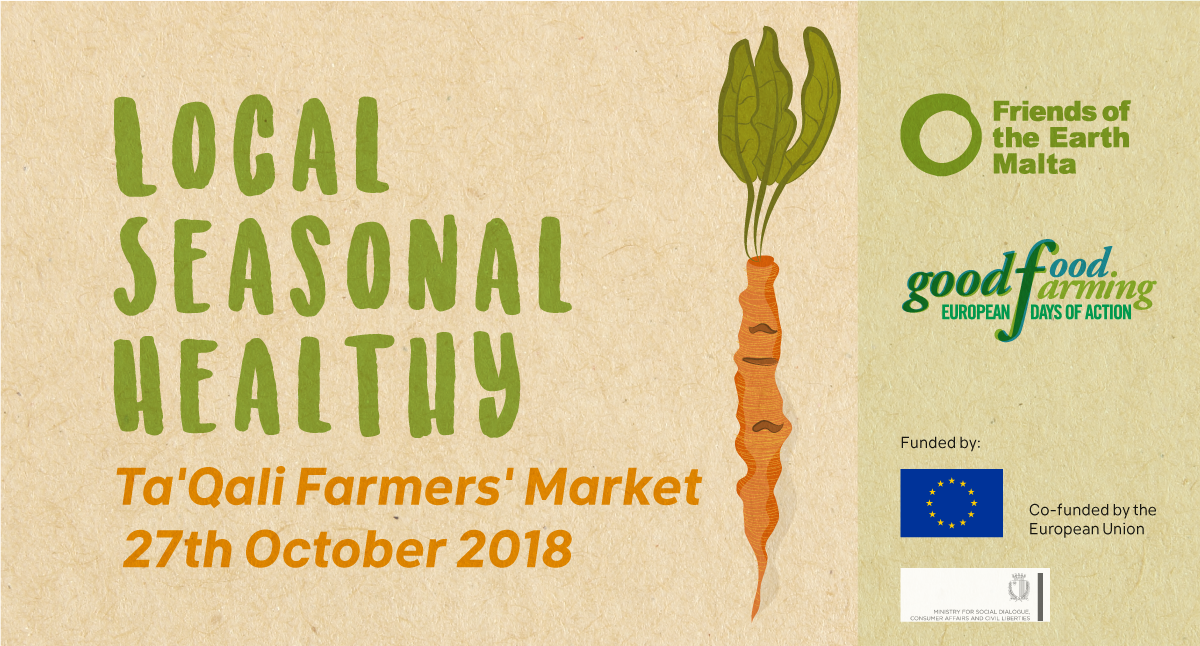 This October Friends of the Earth Malta with our partners all over Europe, invite people to raise their voices to ensure that policies support farmers, the environment and climate-friendly agriculture that is tied into local economies over global food chains. Every single day thousands of local farmers are working hard to produce wonderful, healthy, refreshing food for our plates. We need to save this. All across Europe, citizens are standing up for Good Food & Good Farming.

We will be at the Ta’Qali Farmers’ Market on Saturday, 27th October, from 8am to 1pm, showing support for good farmers and asking you, what sort of food and agricultural system do you think needs supporting. We will have healthy snacks made from local and seasonal produce so that we can picnic, share ideas and discuss how we want our food produced.

“It’s a scandalous that in the midst of this environmental and economic crisis, big industrial farms, extensive food distributors and corporations continue to receive the lion’s share of EU agricultural funds. Together with organizations around Europe we call on EU ministers to build a better food and farming system, in solidarity with people and regions across Europe, instead of big business.” said Martin Galea De Giovanni, Chairperson of Friends of the Earth Malta.

The mobilisation comes as the European Union negotiates a reform to the Common Agricultural Policy (CAP). The current CAP takes up around a third of the EU’s total budget, with huge influence on how our food is produced and distributed. On 19 November, the GFGF movement will target EU agriculture ministers meeting in Brussels for the EU Council summit that will touch upon the new CAP. For GFGF organizers it is fundamental that EU leaders act now and deliver on the objectives of a new CAP that responds to the challenges facing Europe and the world.

Recent years have seen big strides made towards more sustainable agriculture in Europe – including the banning of bee-killing neonicotinoid pesticides, and the ruling of the European Court of Justice (ECJ) that new GMOs be regulated as GMOs. These outcomes are the fruit of expanding civil society networks in pursuit of democratic food systems, such as the peasant-led Nyéléni movement for food sovereignty. However, big industrial farms still pose a huge threat to sustainable agriculture. The EU lost a third of its small farms between 2003 and 2013, and 3% of farms own 52 % of all farmland, the latter a reality that the European Parliament (EP) demanded be addressed. Large-scale, intensive agriculture contributes to global climate change, degrades and depletes water reserves and soil quality and causes mass biodiversity loss. National governments and the EU Commission must ensure that the decisions taken in the ECJ and the EP in defence of a more sustainable farming model be upheld.

Join us to contribute to a powerful movement. Be part of the European Days of Action for Good Food & Good Farming in Malta. More info: https://foemalta.org/event/good-food-good-farming/