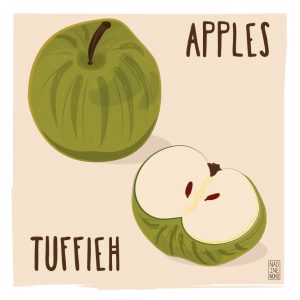 It-tuffieħ ta’ belludja, a local variety of apple and pretty rare to find probably originated from Sicily – Until some years ago it practically died out because of viral diseases and insects but there seems to be a resurgence as farmers are being encouraged to grow it.  Malta produces about 42,000 kg apples (of all varieties) every year. Cooked Apples or Tuffieħ mgħolli is a surprisingly good vegan Maltese traditional recipe.

Step 1 Dice the apples.
Step 2 Place in pot with water and add the cloves, cinnamon and the raisins.
Step 3 Discard the cloves and let the apples cool.
Step 4 Put into a small bowl and serve!

Bonus tip: The water used to cook the apples can be chilled in the refrigerator and served as a drink.

Every month we feature a fruit or vegetable that is in season, along with a fun fact or recipe idea. We are currently working on a project, ACT4CAP, highlighting the importance of citizen involvement in agricultural policy to ensure healthy food and protection of our agricultural land. This project is a continuation of our previous work that was done through the Citizen’s CAP project and Agrokatina.