The Common Agricultural Policy (CAP) is a European Union (EU) policy dedicated to agriculture and rural development. It was implemented in 1962 and was the first budgetary item of the EU. At that time, it aimed at developing agricultural production to feed the European people after the end of the Second World War, a goal it quickly achieved. The steady increase of European production has now led to overproduction.

Since its inception, the CAP has been reformed multiple times, including a major one in 1992. One key change was in intervention strategy, aligning the CAP to the rules of the World Trade Organisation. The last reform took place in 2014 and the reform negotiation process is in full swing for the next CAP cycle which begins in 2021.

Today the CAP accounts for about 40% of the EU’s budget. It remains the EU’s most integrated policy, i.e. the one with the most decisions made at EU level.

The CAP is divided in two pillars, each having different goals and operating schemes. The first amounts to 70% of the CAP’s budget. It grants direct aids to farmers, namely  by providing a basic income based on the amount of land used. There is no link to how the land is used and what is produced. The second pillar is concerned with agri-environmental measures and rural development. It is financed in part by the EU and also by Member States, under what is called co-financing. This part of the CAP provides financial support to new farmers as well as to farmers facing a competitive disadvantage due to their geographical position or their production methods. It also supports the farm’s evolution towards greater competitiveness or environmental-friendly practices.

Currently, the CAP encourages practices of intensive agriculture, cutthroat competition on international markets and corresponding farm expansion. This is instead of providing European citizens with healthy food, supporting small-scale farmers and improving the desirability of the farming profession. The CAP does not encourage environmental and biodiversity protection, improved animal welfare, climate change mitigation or the protection of farmers in the Global South.

Secondly, farming not only produces our food, but many other public goods on which we rely (such as reducing the dependency upon imports, preserving the landscape, creating dynamic rural areas, maintaining a diversity of culinary traditions and fighting against rural land being built up). These services are not reflected in the very low selling price of produce.

Thirdly, a common policy can strengthen a collective voice in light of the need to defend European interests against major global exporting powers and agribusinesses, cultivating food sovereignty, protecting the environment, mitigating climate change and restoring of biodiversity.

We believe that the CAP  needs a major, in-depth reform to win back its legitimacy as a public budget. It must become a policy aimed at the service of all farmers, Maltese citizens and all Europeans. To get there the current, blind financial support, uncoupled to good farming practice must be abandoned, and replaced by a ‘public money for public goods’ approach. The post-2020 CAP needs more coherent governance, greater transparency, and be easily understood by farmers and citizens alike.

We want a fair, green and healthy CAP

We call on policy makers to build a better food and farming system in solidarity with people and regions across Europe. It is time for governments to put the public interest before big business and to realise that the CAP cannot be a one size-fits-all. We need a fundamental reform of the CAP to create a better and sustainable society, driving change beyond the narrow proposals currently being discussed.

What we need is:

A fair CAP, delivering fair revenues to farmers that cover their costs of production and provide them with decent working conditions. The number of full-time farmers locally has decreased and the farming population is currently aging, with few young people pursuing this profession. This is mainly due to the unfairly low income that farmers get for the amount of toil they have to endure and the steep entry price of purchasing arable land and machinery. Those who make the transition to sustainable farming must also be rewarded. A fair CAP must promote local producers over global corporations, minimise resource use and prevent the exploitation of people in developing countries. The current per-hectare farm payments must stop and be replaced by targeted funding and support that promotes the transition to a sustainable society. The CAP must not harm food production capacities of small-scale food producers in Malta and Europe and in developing countries. Trade distorting CAP measures that lead to the destabilisation of markets at the local, national, European and international levels must end.

A green CAP, halting biodiversity loss, minimising the use of pesticides, fertilisers and antibiotics, ending intensive livestock production, reducing waste and radically cutting greenhouse gas emissions. It must promote a resilient and diverse food and farming system, and provide at least 50 percent of CAP funding for measures that protect and promote nature, the environment and climate.

A healthy CAP, prioritising healthy, nutritious, seasonal, local and affordable diets with fresh fruits and vegetables, making these accessible for all citizens. It must support legumes and promote the consumption of less and yet better meat. It must take care of people, animals and our planet.

A CAP for the people, spending public money on public goods. It must serve communities and consumers, and not corporations. We demand that the so-called strategic plans of the CAP are developed in a participatory way, together with local authorities and civil society organisations. They should explicitly seek the participation of farmers that are willing to embrace the transition towards sustainable farming and enable the participation of small-scale farmers and their organisations.

The goals of a fair, green and healthy CAP are universal, which is why we demand that all Member States deliver on the entire set of objectives set by the new CAP. These objectives need to be supported by impact indicators that allow setting of specific goals and track performance. Funding to Member States and farmers must be conditional upon achieving the objectives. 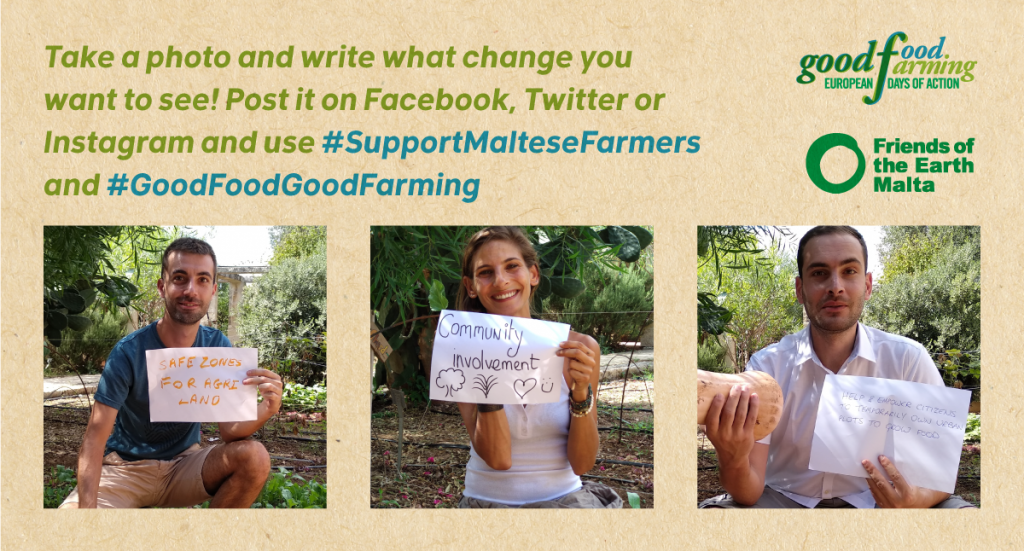