Tremendous victory for our bees and the wider environment. 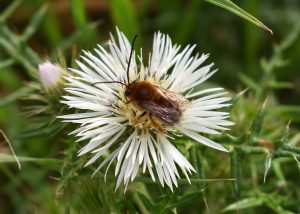 EU governments today passed a total ban on bee-harming neonicotinoid pesticides on outdoor crops. [1] This comprehensive neonicotinoid ban, covering all outdoor crops, is a tremendous victory for our bees and the wider environment.

The European Commission must now focus on developing a strong pollinator initiative that boosts bee-friendly habitat and helps farmers cut pesticide-use. Many farmers are already successfully growing crops without neonicotinoids. But too many other damaging chemicals and practices are still used. Farmers need more support from the European Commission and national governments to farm with nature – not against it.

Martin Galea De Giovanni, Director of Friends of the Earth Malta commended the Maltese authority’s support for the ban and explained how FoE Malta is proposing that government draws up a national strategy or action plan for bees and pollinators linked to biodiversity and climate change actions, food security and farming initiatives and rural and urban development plans. This is already available in other European countries including the Netherlands, England, Scotland, Wales, all Ireland, France and Norway.

Moreover, on a European level Friends of the Earth groups in Europe are calling for an overhaul of the EU’s food and farming system to make it less dependent on pesticides, via a concrete pollinator strategy and a radical change to the Common Agricultural Policy (CAP). The European Commission is expected to issue its proposals for CAP reform on May 31.

Our lives would be poorer in many ways in a world without bees. We take bees and other pollinating creatures for granted at our peril. They are vital for a resilient, thriving natural environment and for stable, healthy food supplies including the varied, colourful and nutritious diets we have come to expect

***
Notes
[1] The vote occurred in the EU’s Standing Committee on Plants, Animals, Food and Feed https://twitter.com/V_Andriukaitis/status/989789960751538176
Neonicotinoids, manufactured by companies like Bayer and Syngenta, were partially banned from use in the EU in 2013 on flowering crops like oilseed rape, in order to protect bees. However, on growing evidence of their harm to bees, the European Commission proposed the three neonicotinoid pesticides subject to these partial restrictions should be completely banned on outdoor crops. New evidence has shown that, after being applied on fields, neonicotinoids persist in the environment for many years, and have even been found drifting into water and wildflowers next to crops.
Predictions by the neonics manufactures that the existing restrictions would result in farmers being unable to grow crops such as oilseed rape have proved unfounded, with high yields being achieved across the EU since the ban – showing these chemicals are not necessary.
[2] Experts from France, Germany, the U.K., the Netherlands, Spain, Italy, Cyprus, Luxembourg, Malta, Austria, Portugal, Sweden, Slovenia, Ireland, Greece, Estonia opted to follow scientific evidence from the European Food Safety Agency concluding that the pesticides “represent a risk to wild bees and honeybees” and voted in favour of the ban.
[3] BeeCause campaign https://foemalta.org/beecause