This article is part of the 9 Key Environmental Demands to be addressed in the Election Manifestos 2022, from a united front of environmental NGOs active to protect the quality of life of residents of the Maltese Islands.

The latest report of the Intergovernmental Panel on Climate Change (IPCC), published in early 2022, once again underlines it: the climate crisis is here, now. Climate change is already affecting those most vulnerable: communities are losing their homes, be it as a result of sea level rise, natural disasters, or people forced into migration due to drought and famine. In Malta, there is a lack of planning on how to mitigate climate disasters, and we are not currently prepared to adapt to a changing climate. A sense of urgency is not being felt, with our limited natural resources, such as groundwater and agricultural land, being ever more exploited, while other renewable resources, such as rainwater, solar energy and wind energy, are not effectively harnessed. 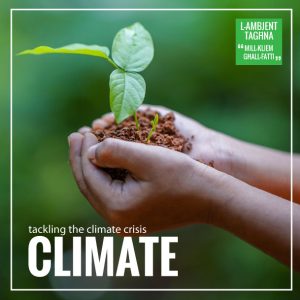 Now is the time to invest in a fossil free future for our islands. Malta’s Climate Action Act (2015) needs to be implemented and a review process should be started as soon as possible, to increase its ambition in view of the actual climate emergency, the new Low Carbon Development Strategy of the Maltese government and the European Green Deal.

We need to invest in proven renewable technologies, such as solar PV, solar water heaters and heat pumps, as well as investments to reduce energy use through building renovations and energy efficiency measures, instead of proposing new projects promoting fossil fuels, such as the Melita gas pipeline. The Low Carbon Development Strategy (LCDS, 2021) needs to be more strategic to contribute to ambitious carbon emission reduction and increased energy sovereignty. The estimated proportion of renewables in the total electricity supply remains small compared to the agreed EU targets: 14% in 2030, and 21% in 2040 and 2050, compared to 8% in 2020. If Malta aims to reach carbon neutrality by 2050, the ambition for the share of renewables must be much larger; to at least 30% by 2030 in line with EU wide targets of 30-40% renewables by 2030. The potential of non-conventional renewable energy sources, such as PV on facades and in glass windows, sea-based PV arrays or wind farms, and onshore micro-wind installations need to be further studied, keeping in mind potential negative effects on ecosystems and biodiversity.

Interconnection to the European grid can help Malta to access renewable energy generated elsewhere in the EU, but this should be made a conditionality. As it is today, importing electricity through the interconnector carries no guarantee that this is green energy, and could instead lead to ‘offshoring’ of the associated carbon emissions. Local renewable energy generation, for example through communal solar farms or renewable energy communities, should be actively encouraged, alongside importing a higher share of electricity generated from renewable energy sources through the interconnector(s). The planned gas pipeline connection with Gela (Sicily), presented as a ‘hydrogen-ready’ pipeline, needs to be carefully considered and discussed openly before major decisions are made. There is currently no plan in place for the consumption or production of hydrogen locally, and thus far, 99% of hydrogen produced still comes from fossil fuel sources.

To reduce our country’s carbon footprint, we need to address one of the major sources of carbon emissions in Malta: land transport, which represents around 40% of national CO2 emissions. Recent road widening programmes to accommodate an ever-increasing private car stock – now nearly as large as Malta’s population – has led to widespread tree-cutting and the destruction of agricultural land. Studies worldwide have shown that road construction and widening does not solve the traffic issue, but instead induces further demand. We need urgent investment in sustainable mobility, such as efficient public transport and safe infrastructure for pedestrians and cyclists. Rather than focusing predominantly on measures promoting a transition from ICE (internal combustion engine) to EVs (electric vehicles), the priority should first and foremost be on reducing the number of cars and journeys made by car. 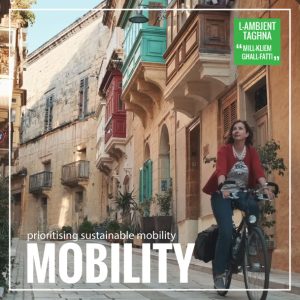 Half of the trips made in Malta measure less than 5 kilometres, which can be easily covered with active modes of transport. To encourage walking and cycling, we need urgent investment in safer and more comfortable spaces to walk and cycle, from pedestrianisation in village cores and city centres, to traffic-calmed streets prioritising active travel, and improved pavements and cycling infrastructure. We call for shorter, more direct bus routes, more use of smaller buses, dedicated bus lanes and more frequent bus trips, including night routes, as well as further ferry linkages. These measures can greatly improve the speed, reliability and connectivity of public transport. Electro-mobility can play a role in a sustainable mobility policy, but the focus should be on reducing the need to travel and on promoting public and active transport, as they have a lower cost of investment, provide physical and mental health benefits, free up public space for people, and can contribute to improvements in air quality and reduction of noise pollution. It is essential to ensure that electricity for EV charging comes from renewable sources, not from fossil fuel based electricity. If the proposed electrification of transport is based on the importation of electricity from fossil sources, the carbon emissions are just shifted, instead of abated. It is time to reclaim our public roads and spaces for clean, healthy and efficient modes of transport, to contribute to meeting our climate, air quality and health objectives.