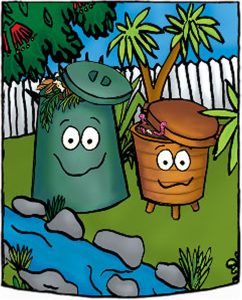 aste expert Enzo Favoino suggested a viable alternative to the strategy being proposed by EU approved consultants in meetings with the Environment Minister and the team set up to decide on a waste management strategy for Malta.

While the EU consultants favour source separation, recycling, incineration and landfilling, Favoino showed that Malta could have a strategy which would be more environmentally friendly, cheaper and allow Malta to comply with all the relevant Directives by adopting a strategy based on: source separation, recycling, biological treatment – a type of composting treatment of mixed household waste – and landfilling.

Favoino was brought to Malta with the assistance of funds made available from the EU Directorate and was chosen because of his experience in the setting up and implementation of waste strategies in the Mediterranean and also on small islands.

He has acted as a consultant to the Italian Environment Ministry and to municipalities in Spain as well as working on programmes for small Italian islands such as Pantalleria. He has also recently been asked for help with ‘Italian methods’ of separation at source by the British government and is setting up pilot projects in Wales and the London Metropolitan area.

Favoino emphasised that, while education and culture may play a part, the success of waste collection was mostly dependent on the system adopted. He showed statistics which indicated that good results for collection and recycling were being achieved where door to door collections were adopted, and that several municipalities in the south of Italy have achieved high rates of the collection of recyclable materials.

The Italian system concentrated on the collection of food waste and paper, both ideal for making compost. These are collected four times a week while the rest waste is collected twice a week. Each household is provided with free, transparent, starch-based biodegradable bags and a small bin. The food and paper waste in the bag is collected in small trucks suitable for narrow roads and traffic-congested areas. In high rise areas larger bins are used.

The system is allowing Italy and Spain to make high quality compost, which is much needed in view of the poor quality of soil in most of the Mediterranean basin. At the same time the cost of the system has been kept as low, and often lower, as the previous system when mixed waste was collected. Surveys showed that the great majority of those participating in the scheme are happy with the system.

Favoino, who also addressed a roundtable meeting organised for representatives of organisations interested in waste management and gave a public lecture, told his audiences that incineration was not necessary either for Malta or for it to comply with EU Directives. He pointed out that the cost of incineration will soon rise considerably as subsidies would no longer be allowed to the extent that has been possible so far.
Biological treatment, which produced what could be termed low quality compost, could be used for that fraction of the waste that is not recycled, or not properly separated. Biological treatment has been adopted by several municipalities in Italy and is expected to become more popular in Europe when the EU Directive on Biological Treatment is passed. The ‘compost’ from biological treatment has a variety of uses including afforestation projects and the reclamation of rubbish dumps.