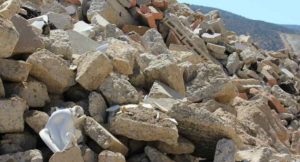 Moviment ghall-Ambjent cannot agree with Environment Minister Francis Zammit Dimech when he suggests that inert waste should be used to reclaim parts of the coastline or to construct small islands off the coast.

The minister would seem to be trying to influence the public in ways which are not acceptable and this at a time when the public is being asked to comment on a proposed waste management strategy for Malta.

It is more than ironic that our environment minister has never started to tackle, and even fails to comment on Malta’s most pressing environment problem: our use of land and is now suggesting that we sacrifice further coastal areas and parts of the sea bed because of the excessive construction and demolition waste that is being created.

It is absurd that the government has no body or person responsible for speaking in favour of the environment as far as land use is concerned.

Sustainable development in Malta seems to be just a catch phrase when used by ministers. Friends of the Earth (Malta) calls on the Environment minister to start tackling Malta’s interlinked environmental problems by taking action to achieve sustainable development and reduce the volume of C & D waste being created.

Waste expert Enzo Favoino has shown that incineration is not necessary for Malta’s waste management plans and that there are options that would be more environment friendly and substantially cheaper.