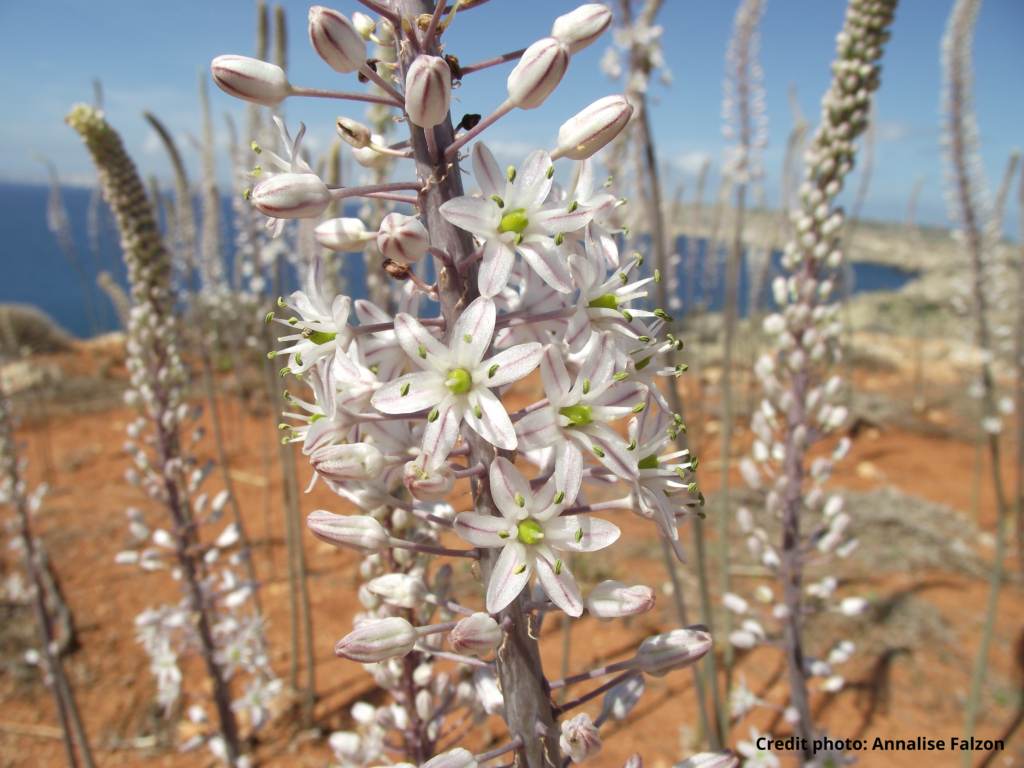 August is one of the toughest months for all wildlife and few plants have the resilience to survive the scorching heat and drought of the Maltese dry season. Annual species usually complete their life cycle before the heat while perennials adopt extreme strategies such as by having tiny but tough leaves, by going dormant in summer or by drastically reducing their greenery. The Sea Squill uses an avoidance technique combined with a clever storage of nutrients and water encased in an extremely tough (and toxic) bulb. Such geophytes use the wet season to grow their foliage to collect and store resources and then shed all leaves in spring to save energy and disappear underground in preparation for the grand awakening in an otherwise desert landscape. The beautiful flowers usually start blossoming on a metre tall stalk around August with pretty star-like flowers which are often the only source of food for various insects at this time of year.

The Sea Squill can be seen inland as well as along the coast in exposed areas with very little soil and is often the only survivor of summer fires and degraded land. Notwithstanding its toxic attributes (which make it unattractive to many grazers) the bulb has long been used in herbalism and seems to have also been exported from Malta to northern Europe for extracting natural remedies such as Oxymel of Squill which can be found in present day cough remedies.

Further reading on Maltese Flora can be accessed at our Community library in the exhaustive work of Alex Casha’s Flora of the Maltese Islands as well as in the handy field guide Wild Flowers of the Maltese Islands by Edwin Lanfranco and Guido Bonett. Online you will find detailed local flora information on this great site http://www.maltawildplants.com/.