Friends of the Earth Malta is currently organising a series of events called “Mill-bdiewa għall-bdiewa“ (From farmers, for farmers): informal workshops in which young farmers and others interested in agriculture and gardening share their knowledge. Topics range from learning how to compost with worms (vermicomposting) to how to graft fruit trees. The latest session in the series focused on the latter: how to graft different fruit species on almond trees. On a sunny Sunday morning we gathered at the fields of Charlot Attard on the outskirts of Siġġiewi with a group of over 20 enthusiastic participants to learn more about the art and science of grafting. 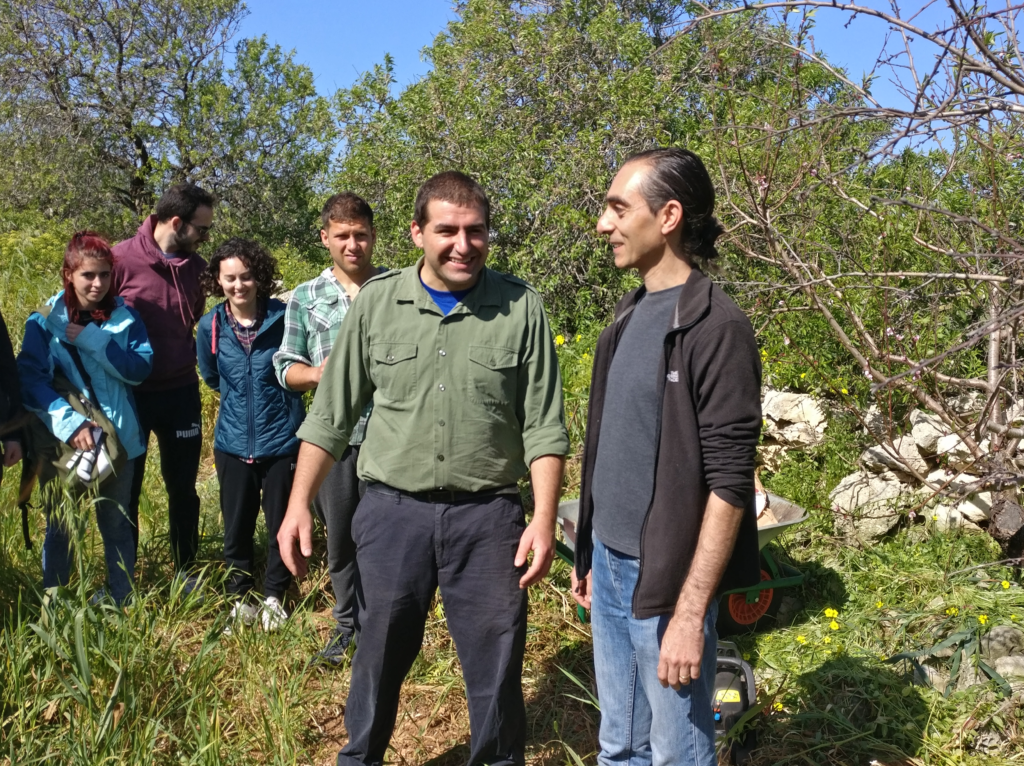 First a bit of basics about grafting (tilqim). Grafting is a technique in which a shoot from a tree (a segment with buds, called the scion, or brokk) is grafted onto the rootstock (bagħal) of another species. Using different methods, the cambium layers (the growing part of the tree, just under the bark) of the two parts are connected to create a union. To obtain scions, you can take cuttings of shoots from a desired tree, or ask other farmers or gardeners for shoots from their trees. The rootstock can be used from one year of age. You can start the grafted rootstock in a pot if the rootstock is still small, or graft directly on to a tree in a field or garden (as demonstrated in this session).

It is important that the two species are compatible. Some local examples are the grafting of peach (ħawħ), plum (għanbaqar) and sweet almond (lewż) onto bitter almond rootstock. There is debate over whether apricot (berquq) can be grafted on almond. Other examples are grafting apple on quince (sfejgel), or citrus on other citrus varieties. You can even put different species on one rootstock, creating one tree that produces different varieties of fruit. There are rootstocks developed for particular resistance against disease or adapted to conditions (for example, for soil with higher alkalinity, like in Malta).

There are different techniques for grafting, such as cleft grafting (bil-feles), bark grafting (bil-kuruna), and bud grafting (bil-għajn). Then there are other ways of propagating, such as air layering. In the session we discussed the three aforementioned grafting techniques. Different techniques are suitable for different stages of tree growth. The period of the year of this session (end of February) is not the right time for all techniques, so some techniques were shown just for the sake of demonstration. The appropriate time also depends on the tree species: almond trees are active or dormant at a different period of the year than citrus trees for example. The periods mentioned here are for grafting on almond trees.

Charlot first explained a few basic good practices. Grafting is like a surgical procedure on the tree, so it is important to work with clean tools and disinfect them, using 70% alcohol or household bleach. It is important to make sure that the rootstock and scions you use are healthy, so as not to introduce disease. If you buy or cut scions and want to save them for use later on, you can keep them in a plastic bag in the fridge for some weeks. When you cut a shoot (the scion), always cut between the nodes (the buds, or għajn). Work from the inside of the tree to the outside, so as not to disturb grafts already made. To prepare the rootstock, saw off a stem close to the base of the tree and clean the part where you cut with a grafting knife, to ensure the surface is smooth. 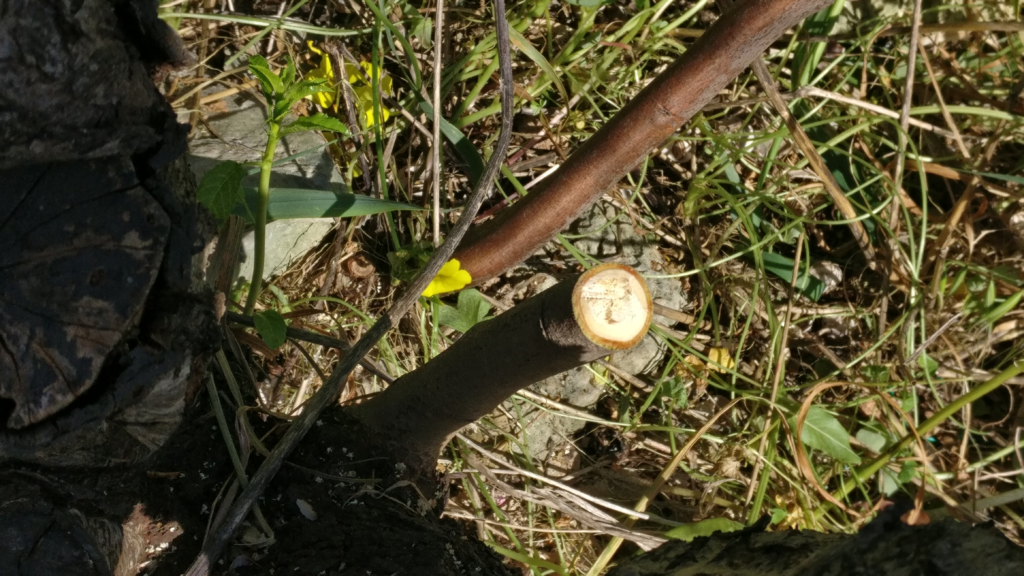 Preparing the stem of the rootstock: cut and cleaned with a smooth surface

Cleft grafting is done when both the rootstock and the scion are dormant, around December. Make a straight cut on the cut stem of the rootstock, using a knife and if needed a hammer or mallet. Prepare a scion of around 10 cm, with four or five buds and cut the bottom into a V form (point). Always make sure the buds are facing the right way up. You can insert two scions in the cut in the rootstock. Once both scions have been inserted in place, it is important to close off the graft, to ensure water doesn’t enter, while keeping the graft in a humid and protected environment to allow the cambium between the scion and rootstock to grow together. You can use tape or raffia to bind the scion and rootstock together, up to the top of the graft (the level area of the rootstock). You can use mastic gum as a sealant, on the side and on top to keep moisture inside. It is also possible to cover the whole graft with a plastic bag to keep moisture trapped and create a little greenhouse (making a few holes for air). You can leave the bag for a few months until the first leaves have formed. Leave the tape or raffia longer.

Bark grafting is done when the rootstock is active (when the cambium is growing), but the scion is dormant, from January/February until May. Cut laterally into the bark (periderm), making cuts of around four to five cm. The cut on the scion is different from the way the scion is prepared for cleft crafting. For bark grafting, first make a cross-sectional cut on the scion and then from the bottom cut the scion in half up to the cross-sectional cut. On the other side of the bottom of the scion, make a slanting cut again to create a point. Insert the scion so it sits flush with the cut rootstock (with the straight side of the cut facing the stem, and the slanting side facing the bark of the rootstock). With bark grafting you can insert three scions in the rootstock.

Bud grafting is done when the bud (on the scion) is dormant, in September/October or May/June. Cut a wedge with a bud from the scion. On the rootstock make a lateral cut into the bark in an inverted T shape. Then open up the bark and insert the wedge with the bud (making sure the bud is facing up). Wrap the entire part of the rootstock with the bud wedge with stretchy white tape (paraffin or buddy tape, or masking tape).

There is not one particular form of grafting that has more success. It is normal that some grafts don’t take. You can increase your chances using bark grafting, since you insert up to three scions per graft (versus two using cleft grafting, and one using bud grafting). However, all grafting techniques are worth a try, depending on the time of year.

Thanks goes to Charlot, as well as his friend André, for sharing their experiences with us and inviting us to their land.

If you or someone you know has a farming or gardening skill or knowledge that you’d like to share with others in a session, get in touch with Friends of the Earth Malta via email or send a message on Facebook.