In June 2021, after a three years long reform process, the European Parliament, the Council of the EU (national agricultural ministers) and the European Commission agreed on the Common Agricultural Policy (CAP) post 2023. The policy is one of EU’s oldest and there are 387 billion Euro in EU’s budget for the period 2021-2027 allocated to it.

The final step in the reform process is a vote in the European Parliament expected in late November 2021 to seal the deal.

At the same time, Member States are working hard to prepare their plans for the implementation of the new policy. The implementation preparation process will include the writing of the so-called CAP National Strategics Plans by each Member State which should be presented to the European Commission by the end of 2021, while the Commission will assess, evaluate and agree to those in 2022. The objectives of the Farm to Fork Strategy (part of the European Green Deal) in relation to environmental, climate and social issues will play an important role in this assessment process.

Bring the dialogue – Green European DEAL and the CAP

Together with several of our members, we at Friends of the Earth Malta with other Friends of the Earth groups from Europe, want to accompany this process and provide information about the new CAP to citizens. We also want to create dialogue spaces with stakeholders in different European countries to help understand the new CAP and allow citizens to possibly shape the national implementation of this policy in their country. We will prepare some easy understandable materials and engaging events to bring farming closer to urban people and the questions of citizens discussed with producers. 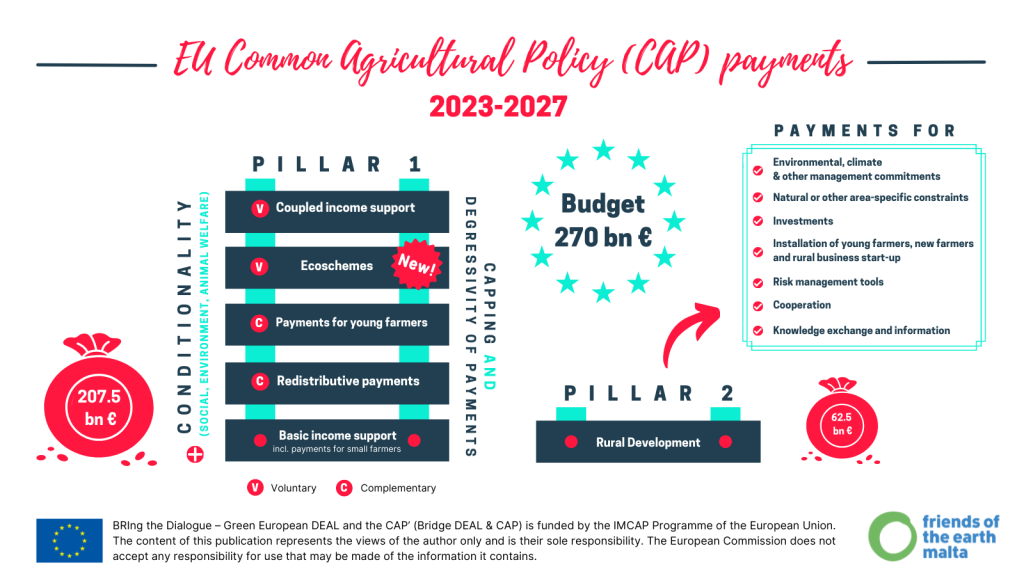 Dive in the CAP lexicon

To get familiar already with some key elements of the policy, check out the vocabulary below.

annual decoupled  payment per eligible hectare taking up around 60% of all farming funds. Those payments existed already before. Average payment per hectare across the EU amounts around 250 EUR (though big variations exist between countries and regions).

the minimum requirements CAP beneficiaries (farmers, but also other rural actors) have to comply with to receive support. For example, on every farm at least 3% of arable land should be dedicated to biodiversity and non-productive elements.

Ecoschemes (schemes for the climate and the environment)

a new voluntary instrument for farmers who want to implement climate and environmentally-friendly practices (organic farming, agroecology, integrated pest management) as well as animal welfare measures. Member States are expected to allocate at least 25% of their income support budget to ecoschemes (€48 billion of the direct payments budget) while farmers can chose if they take those up or not.

those measures existed already in the past. With the new CAP35% of funds are supposed to be allocated to agri-environment commitments, which promote environmental, climate and animal welfare practices.

a measure allowing at least 10% of the national direct payments envelope to give complementary income support for small & medium-sized farms.

We have compiled some useful links just for you:

This article was seen first on FoE Europe website.

We are redesigning our ‘Malta Farm Map’ Friends of the Earth Malta are looking for a web designer to support...

The Common Agricultural Policy was initiated by the EU with the aim of guaranteeing affordable food security, while simultaneously improving...