Plants and Nature Conveying Augmented Knowledge for Everyone 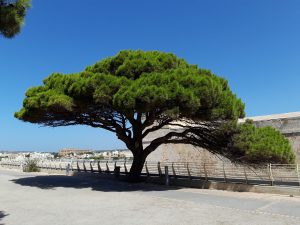 As part of Project PANCAKE (Plants and Nature Conveying Augmented Knowledge for Everyone), we are looking at a number of plant species chosen by associations for the deaf in Malta, Italy, Spain and the UK to create new signs. This month, we give special attention to the Aleppo Pine (MT: Siġra taż-Żnuber) – Pinus halepensis.

Native to the Mediterranean, this evergreen conifer was named in honour of the city of Aleppo and the surrounding region where it was first described in the 18th Century. It is truly an ancient resident of Malta as traces of its pollen were found in local Pleistocene deposits. Sadly though it seems that it became virtually extinct here in the wild by the 19th century. It has since been used widely in afforestation, landscaping and habitat regeneration projects and it has found its way back in the wild through self-seeding. This pine is well adapted to drought with its needle-shaped leaves which reduce water loss and allow the tree to retain foliage throughout the year.

The Aleppo Pine can grow up to 20m high and it does not flower but produces cones which are either male or female. Male cones form in clusters and are short-lived – a gentle breeze will release their pollen in small clouds in spring and in parts of the Mediterranean they are important for forest honey production. The female cones (on the same tree) take 3years to mature and it is around this time of year, on very hot days, that one can sometimes hear the cones cracking open to release the winged seeds. Seeds can be kept in dry conditions and sown in February to help grow some more drought-resistant trees for the future.

If you are interested in helping to increase tree cover in Malta, check out the initiatives by Grow 10Trees Malta.

Check out our Community library for publications on local biodiversity!

Click here to get an insight into Trees and Shrubs of the Maltese Islands and their Habitats by Eman J. Calleja.

Plants and Nature Conveying Augmented Knowledge for Everyone