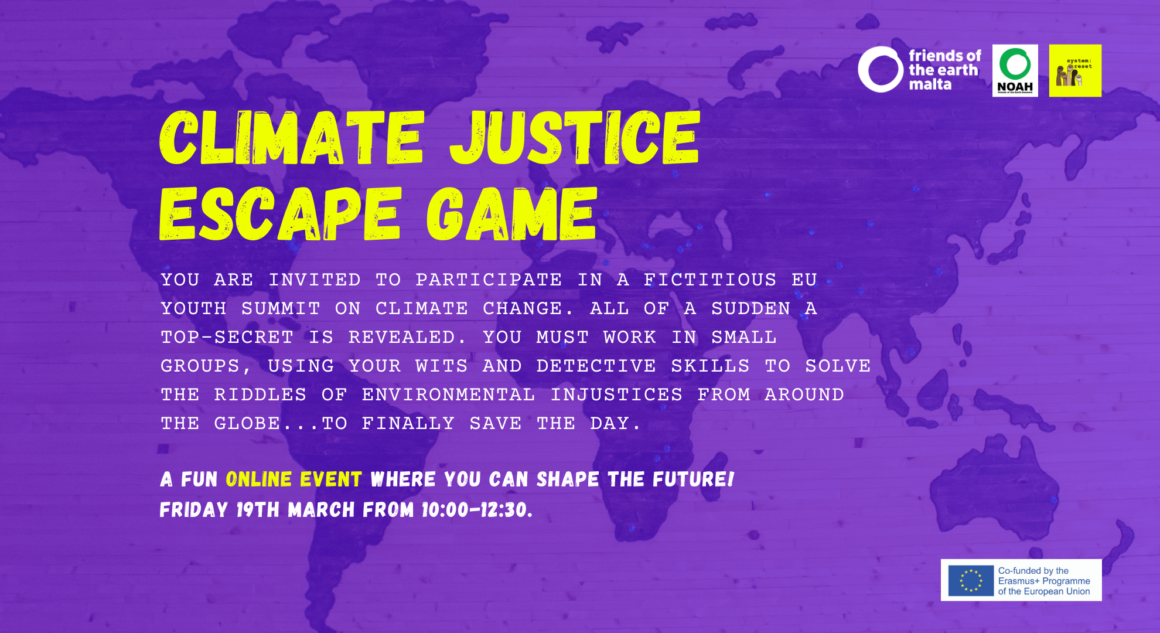 // CANCELLED // Unfortunately we have had to cancel this event. We hope to see you soon at other Friends of the Earth Malta events!

Solve the biggest issue yet by joining this fun session of escape game to be free of climate change and understand how it is impacting people around the world!

You are invited to participate in a fictitious youth summit on Climate Change in the EU. During the meeting, it dawns on everyone that the G20 countries are making fundamental decisions that will impact people in the world’s poorest countries. To solve the issue and save the day, you will work in small groups and must solve different tasks and clues linked with social-environmental injustices. Finally, you will get the opportunity to rewrite the future of climate policy so that is shaped around what you want for the future of Malta, Europe and the world.

In this ONLINE event,  you will work in small groups. To solve the riddles, you will receive a very important pack of clues and information to your home. In this extraordinary quest, we will need you to use your wits and detective skills to save the day! So join us, for this fun, brain-racking and learning event, on Friday 19th from 10:00-12:30.

This event is free, you just have to fill in the form below to register. The event is open for young people between 15-27.

Climate change is the greatest threat of our time to human rights, social justice, and eco-systems. It is driving an escalation in environmental injustices that disproportionately affect already marginalised communities around the world. In the current unjust and unsustainable system, the most oppressed communities, who have contributed least to causing climate change, are being hit the hardest. This reality is acknowledged as environmental racism. Several studies show people of colour have higher chances of living near industrial areas, major roads, mines, power plants and dumps. Both in the North and South, people of colour have higher rates of illnesses due to air, water and soil pollution. It also acknowledges that these communities are often denied the right to a healthy and good quality living space and amenities such as parks and have the least access to resources and power to challenge this injustice.