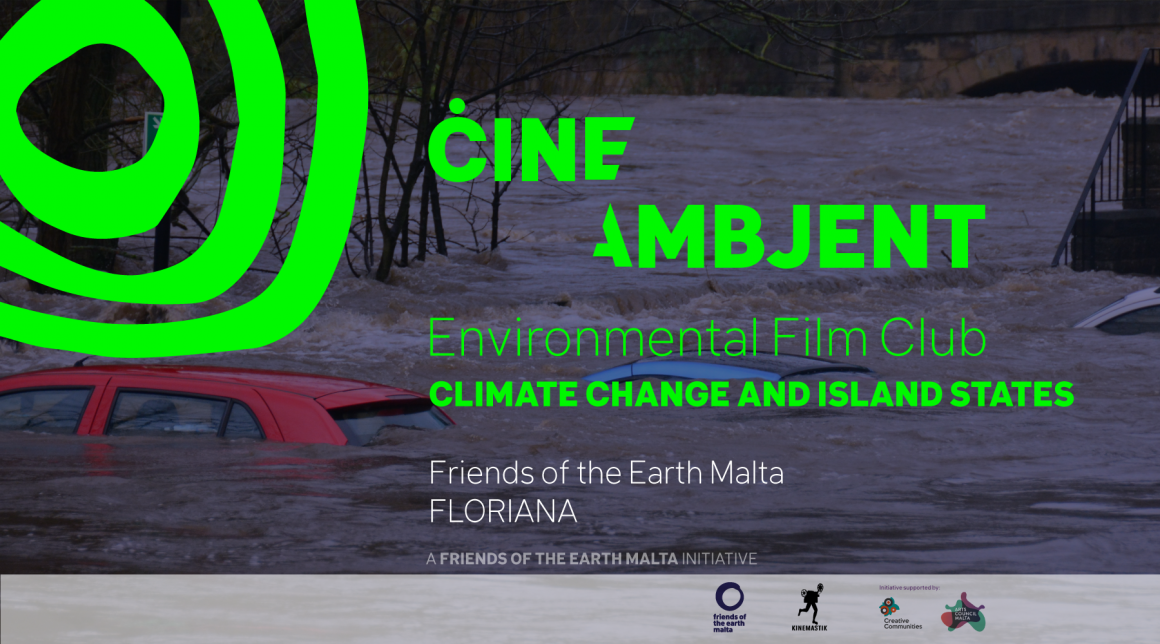 The Friends of the Earth Malta Environmental Film Club is centred around thematic documentary and film screenings linked to current environmental justice issues. For the ĊINE’AMBJENT #8 session we will be looking at Climate Change and Island States.

Join on Friday 12th of April at the Friends of the Earth Malta GRC in Floriana to discuss Climate Change. Doors open at 18:00 for drinks, the screening of will start at 18:30 sharp and will be followed by a panel discussion (scroll down for more info). 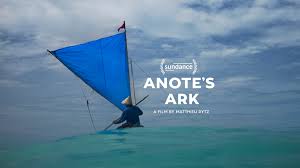 Climate Change — the biggest phenomenon that will impact our environment, our lives and the way we live. Yet it is so overarching that at most times it feels more like a concept and less of a reality since its implications are seen too far away for most of us to associate with. But climate change will have far-reaching implications that will effect us all, not only polar bears with their habitat melting, or people living in areas that are experiencing extreme weather.

🌊Little has been done to mitigate the situation on a global level and now communities already need to adapt and face hard choices. What if your country was swallowed by the sea? Kiribati is a remote place on Earth and yet one of the 1st countries facing the annihilation from sea-level rise.

The film screening will be followed with a panel discussion. Joining us on the day will be:

Stefano has been working since November 2008 with the University of Malta, where he lectures and conducts research in the areas of development economics, climate change, island studies, sustainable development, and European studies. He obtained his Ph.D. in Economics from the University of Malta in 2016 focusing on the links between development and climate change adaptation, especially on the impacts of Overseas Development Assistance on health and adaptive capacity in Least Developed Countries. As part of his research he developed a new impact evaluation assessment that makes use of participatory qualitative research and quantitative (quasi-experimental) techniques. Stefano’s recent research activities include health and economic assessments, in the face of climate change, of urban communities in Africa and in Small Island Developing States, with a focus on the Pacific Region.

Charles is a senior lecturer with the Division of Environmental Management and Planning within the Institute of Earth Systems. His expertise focuses on weather and climate, the application of earth observation techniques for marine and terrestrial ecological mapping, as well as environmental data processing and analysis. Dr Galdies previously served as Chief Meteorological Officer of the Malta Meteorological Office, and Deputy Executive Director of the International Ocean Institute Headquarters. He was also the Permanent Representative of the Government of Malta with the World Meteorological Organisation.

Catherine Polidano is a mother, teacher, environmental activist and permaculture disciple.  She undertook a certification programme in Environmental Management at the Technical University of Nova Scotia.  Catherine has worked in the waste management unit of the Malta Environment Protection Department.  Subsequently she worked as Senior Performance Auditor at the Malta National Audit Office.  There she helped audit the performance of various environmental initiatives undertaken by the Maltese authorities. Catherine was one of the founding activists of Moviment Ghall-Ambjent, and the founding Chairperson of the Save Wied Garnaw Action Group. Together with other like-minded educators and students, this March, Catherine set up the Malta Schools4Climate Action Group. This group is lobbying government to reduce Maltese schools’ ecological footprint in meaningful ways.

Josianne Muscat – Directorate For The Environment and Climate Change, MESDC

The screening is free but places are limited. Submit in the form below to reserve your seat.

The film club will follow with the following thematic screenings:

The film club is co-curated between Friends of the Earth Malta, Kinemastik, and the presenters of each session.

If you are interested in presenting one of the sessions, assisting in the curation or the organisation of the film club, get in touch with Anastasia on anastasia@foemalta.org.