On the morning of the 7th of January, just a week into the new year, work on the Central Link project began. In a civilised country where commondecency prevails, residents and farmers would have been notified that work was to begin. In the case of Malta, where Transport Minister Ian Borg has unapologetically vowed to ignore even a whisper of opposition to this road, trucks and workmen showed up unannounced.

Locals were left in shock as they witnessed machinery destroy farmland. In a matter of days, land – most of which was supposed to be outside of the development zone – was now gone. A sheep farmer told the Times of Malta that he had no time to find an adequate building for his animals, leaving them basically homeless. Another farmer watched as his crop of broccoli was cleared, his livelihood being stolen in a matter of moments. With every day that passes new images of the ongoing destruction are being circulated on social media. Comments of despair continue to flood in.

The Central Link will see around 50,000 sqm of land being covered and close to 500 trees removed between Mrieħel, Attard and Rabat. It will divide Attard, leaving around 1,000 residents stranded between two roads and will impact 47 farmers. The legality of the road was brought into question from the moment plans were revealed, and eNGOs are still in the process of appealing the Planning Authority’s approval of the road in July of 2019.

While the decision was taken last year, the campaign began in 2018. Following news of the road, the Attard Residents Environmental Network (AREN) was created. I spoke to Prof. Christian Scerri, a Consultant in Medical Genetics and Professor of Genetics and Physiology at the University of Malta. In the little spare time that Christian has, he forms part of the resident-led organisation who has campaigned for better mobility and transport solutions since its inception.

I meet Christian at Verdala Palace, an environment which is miles apart from the chaotic scenes in Attard. He is attending a conference celebrating World Cancer Day, the area of his specialisation. The area surrounding the palace, however, holds a lot of significance for him. He tells me, ‘I am from Rabat. I was surrounded by countryside. In the winter and spring, we used to be here every weekend.’ He adds that, ‘my grandmother was an animal-lover’ and his family owned fields which they used as a hobby-farm. His love for Malta’s natural environment began in during his childhood. 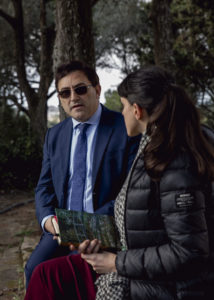 He admits that during young adulthood, ‘when [he] was studying, [his] interest in the environment was not very high’ noting that as he grew older,he started to appreciate nature again. Christian explains that it was his area of specialisation which opened his eyes to the impact of environmental degradation. ‘I started studying genetics 30 years ago and eventually took a turn into cancer.’ Here he delved into the topic of ‘epigenetics’ which is essentially, ‘how your environment changes your genes. How they are switched on and off.’

Research into cancer has shown that in most cases the illness is caused by external factors. Christian explains that while certain personal lifestyle choices like smoking or drinking can trigger the disease, other leading contributors include lack of exercise and increased pollution. Both factors he believes are closely tied to Malta’s car-dependency.

Christian says, air pollution in Malta is primarily made up of fine particles that have a diameter that is less than 1/200th of the diameter of a human hair, from vehicular exhaust and construction waste. These particles stay in the air longer than larger particles. He continues by saying, ‘microparticles actually bypass our nose and airway particle traps and can thus enter the bloodstream’ which is why they are so harmful. He points out that mature evergreen trees, like those being cut down to make space for the new road, serve to soak up these air pollutants. While environmental degradation undeniably wreaks havoc on nature, it also stands to have detrimental effects on our health.

Through Infrastructure Malta, Transport Malta is blatantly ignoring its own strategies and policies. Christian believes, they are pushing for a car-centric society. He explains, ‘if you look at the Central Link, there is a community of around 1000 families who will be blocked by two major roads, the speed of which we still do not know. If we take the recent decisions taken for other major roads, one will have to wait 3 minutes just to cross at the lights.’ Christian adds, even for a short trip to the town’s church ‘the message is, “Take the car”.’ He points out that this has already happened with the Marsa flyover project, ‘you cannot cross on foot or on the bike. What is happening is that we are becoming isolated and we are being forced to use our car.’ As Christian underlines ‘one of the major issues with cancer is lack of exercise.’ A simple fix is to ‘assist and encourage pedestrians as much as possible… we need to incentivise walking.’

AREN’s main aim was to offer better solutions than the Central Link project. Solutions that prioritise the health and well-being of Attard’s residents as well as safeguard the livelihoods of farmers in the area. Christian recalls, ‘our major proposals were to reduce cars’ and during the planning process, ‘we gave [authorities] these proposals. Once this was not acceptable, we went to our second objective, that of reducing traffic from Attard or at least reduce the inconvenience, health effects and destruction of arable land. So, the message was, if you want to widen roads, think of a tunnel and think of alternative routes.’ These proposals were effectively tossed aside, some met with a simple ‘no way’.

He believes that authorities were hell bent on keeping the road on the ground because ‘you have opened the process of building things on the land.’ The commercial opportunities will inevitably sky rocket. If the road were above ground or below ground, this scope would disappear. In fact, while trees, farmers’ buildings and arable land have been cleared, billboards have been moved a few metres out and the petrol station still stands unharmed.

The lack of communication between authorities and those being directly impacted by the road did not begin on the 7th of January. Our conversation turns to the planning process, Christian tells me, ‘Do we really have authorities and agencies who sit down, consult, see the problem, solve the problem and sometimes admit that they may have seen things differently?’ The answer he says, ‘is no.’ He recalls that ‘when the central link was first proposed the local council in Attard was not even consulted. When everything was planned, they set up a meeting to inform the residents. The plans were there and there was no way to change them. It was a very arrogant way to present everything.’ 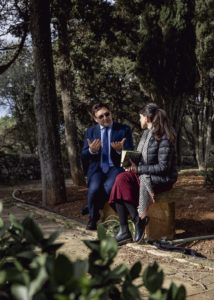 He believes that ‘there is no genuine democracy.’ Adding, ‘globally governments do not listen to real scientists. They listen to “experts” who were commissioned by them’ A situation which was echoed in the planning of the Central Link where local experts were bypassed in favour of yes-men. While Christian is not idealistic, he does however, expect more from the local authorities.

At face value, work beginning on the road seems like a major loss for Christians and other members of AREN. However, he still finds a silver lining in the situation. He points out that ‘the Central Link has brought us together.’ The ‘us’ he is referring to is environmental organisations. Unconvinced by the desperate crusade launched by Infrastructure Malta and Ian Borg to green wash the Central Link project, environmental organisations banded together to support the resident-led group.

Perhaps the most significant moment was during a crowd funding campaign for the appeal, against the decision. The campaign was backed by 14 registered NGOs and raised over €20,000 in under 24 hours. Christian sees an opportunity, ‘I think it is about time that these groups form a platform. We are seeing that pressure works.’

When I question whether Christian is prepared to concede defeat, he responds ‘this is marathon, we will not stop here.’ As we conclude our conversation, he says ‘I am 58, so I have seen many set-backs. One of my favourite toys, which represents my character, is the one where you have a heavy spherical hemisphere which you push down and it comes up again. If I believe in a cause I will fight it out until I am proven wrong.’

The article was written by Maria Eileen Fsadni based on an interview that she conducted with Christian Scerri. Photography by the Lisa Attard.