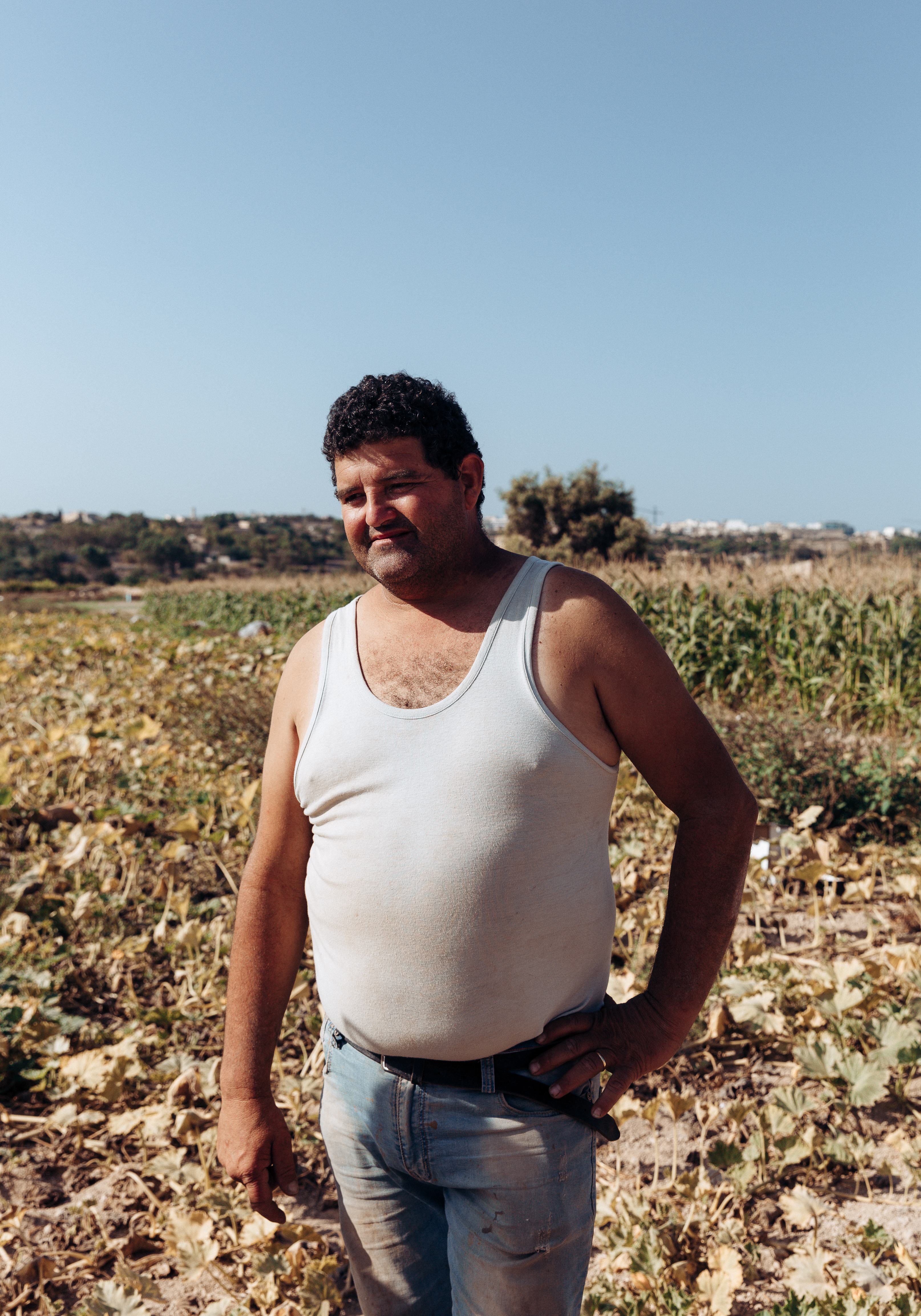 for the Maltese Version of this article click here

The Central Link Project needs no introduction, stories surrounding the road have dominated headlines since the Planning Authority approved the project last July. Following news of its controversial approval, a protest against the Central Link was attended by over 1000 people and a crowdfunding campaign for the appeal, against the decision, raised over €20,000 in under 24 hours.

The road will connect Mrieħel to Rabat aiming to alleviate traffic in the Attard area. The current plans will lead to over 500 trees being cut down and close to 50,000 sqm of virgin land lost, land which is still being used by at least 47 farmers. In an attempt to combat criticism, Infrastructure Malta scrambled together a desperate propaganda campaign. The series of Facebook adverts reminded people that ‘facts count’. Resembling the plot of a George Orwell novel they manipulated figures to greenwash the road and minimise the PR nightmare.

Of course, behind the facts and figures, one finds real people whose quality of life and right to work will be forever altered should the road be built. I spoke to Victor Tonna, a full-time farmer who stands to lose a large chunk of his land, in Attard, to the project.

The land Victor rents from the government has been in his family for generations. He recalls having spent his childhood helping his parents and grandparents work the same land. Land, which is supposed to be outside the development zone, and thus theoretically protected by law ‘till they take it away’, Victor says. Today, his young son, Jean-Paul, is following in his father’s footsteps. A keen farmer himself, Victor’s son, eagerly toured me around the farm and with a sense of pride showed me the wealth of crops and fruit trees they have growing.

In an interview with Times of Malta Frederick Azzopardi, Infrastructure Malta CEO, boasts that ‘we have already reached an agreement with more than half of the farmers impacted by this project.’ Earlier in the same interview he says ‘We try to reach agreements on a one-to-one basis with affected parties.’ But, my conversation with Victor immediately reveals how detached the authorities concerned are from the destruction their decisions will leave behind. 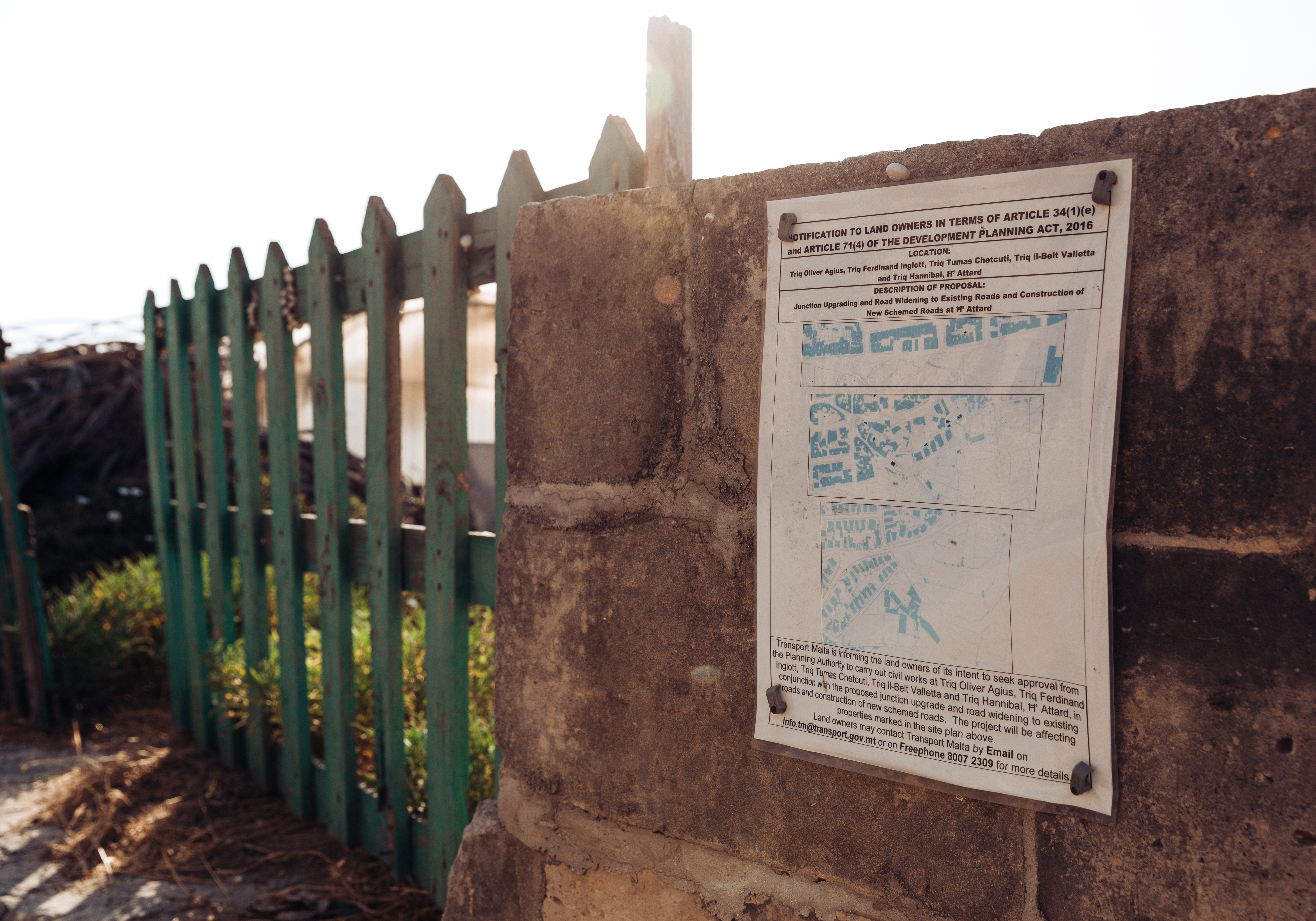 His land is home to a typical Maltese farmhouse, which today serves as invaluable storage for his tools. As he explains however, ‘when they build the road, I will have a huge problem to access the farmhouse… There will be two roads here, one for the residents and the other for the bypass’, leaving the farmhouse isolated from the rest of the land and cutting off his current entry point. He goes on to say, ‘we asked them to include a tunnel, but they said they can’t.’ Adding, ‘we have a borehole near the farmhouse, how will I access it?’ His comments uncover the lack of consultation with farmers when the road was being planned.

When asked whether he will be offered compensation for the loss of land he simply replies ‘nothing.’ The government will only give him compensation for ‘what is in the ground’, completely disregarding any future losses. This form of compensation is the bare minimum a farmer can receive and it is something which is required by law. Forcing one to question why we lack the necessary legal framework to adequately protect a farmer’s right to work and receive compensation.

Victor also speaks to me about the false solutions Infrastructure Malta offered him to move his greenhouses and fruit trees. ‘The greenhouses’, he explains, ‘they told us that they will be moved and placed elsewhere.’ Not satisfied with this answer he adds, ‘these are old greenhouses, when you touch them, they will collapse.’ Regarding the fruit trees which are a permanent fixture on his farm, the authorities suggested that they will replant them. With no guarantee of the replanting being a success, he tells me, ‘it’s more worth it to start from the beginning’. With mature fig and olive trees as well as prickly pears their upheaval will further eat into his profits for the foreseeable future.

The ‘one-to-one’ agreements that Frederick Azzopardi so gleefully boasts about surely did not happen in the case of Victor. He explains that farmers and residents were never listened to during the planning process. Meetings were clearly held to tick a bureaucratic box as he recalls, ‘one time they held a meeting in Luqa and they kicked us out. During the meeting, one of the men escorted us out telling us that the meeting is over. That was it.’ He attributes this behaviour to the fact that meeting-goers were expressing unfavourable opinions and the authorities simply did not want to hear. 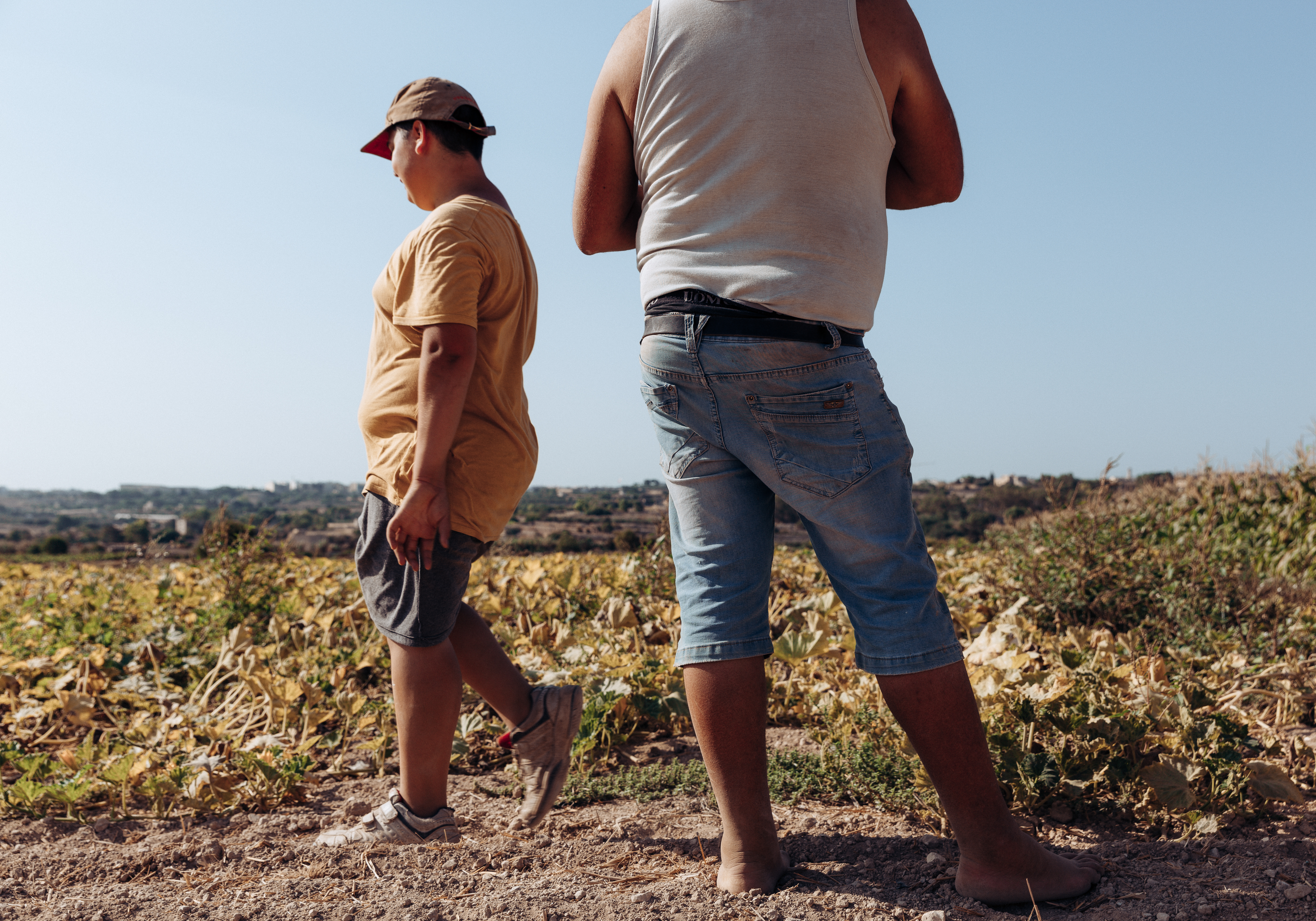 Victor further confirms that he was never consulted by adding, ‘on TV they said that all the farmers accept the project. Accepting?! I haven’t said yes or no.’ I questioned whether the Parliamentary Secretary for Agriculture, Clint Camilleri, spoke to any of the farmers, Victor tells me, ‘when we spoke to him during a meeting, he told us he would call but he never did.’ Clint was notably absent during the Planning Authority board meeting, farmers were represented instead by John Camilleri, a part-time farmer who has land in the area.

In response to the aggressive propaganda campaign in-which Transport Minister Ian Borg asserted that the Central Link is ‘pro-environment’ Victor says clearly ‘it’s not good for the environment… The exhaust will still be there.’ To claims that the road will minimise traffic, he says ‘the roads are designed like a bottle of Kinnie’, describing the ‘bottle-neck’ effect of Maltese roads.

His message to elected officials is simply to ‘Help farmers… farmers are not progressing, they are regressing. We are working to pay off expenses.’ Adding, ‘the farmer is never mentioned [by elected officials].’

Victor is adamant that he will continue to fight to the end, hoping that the appeal process being pursued by eNGOs will be a success. When questioned why he will not give up he confesses, ‘I was raised here. It will be heartbreaking to see the machinery come in. I feel the same way when I pass by other fields which are being used to widen roads.’ Victor also expresses concern for his son’s future. While he undoubtedly shows an interest in farming and he wants Jean-Paul to pursue higher education in agriculture, he worries that this industry in Malta is at a dead end.

The article was written by Maria Eileen Fsadni based on an interview that she conducted with Victor Tonna. Photography by Lisa Attard.