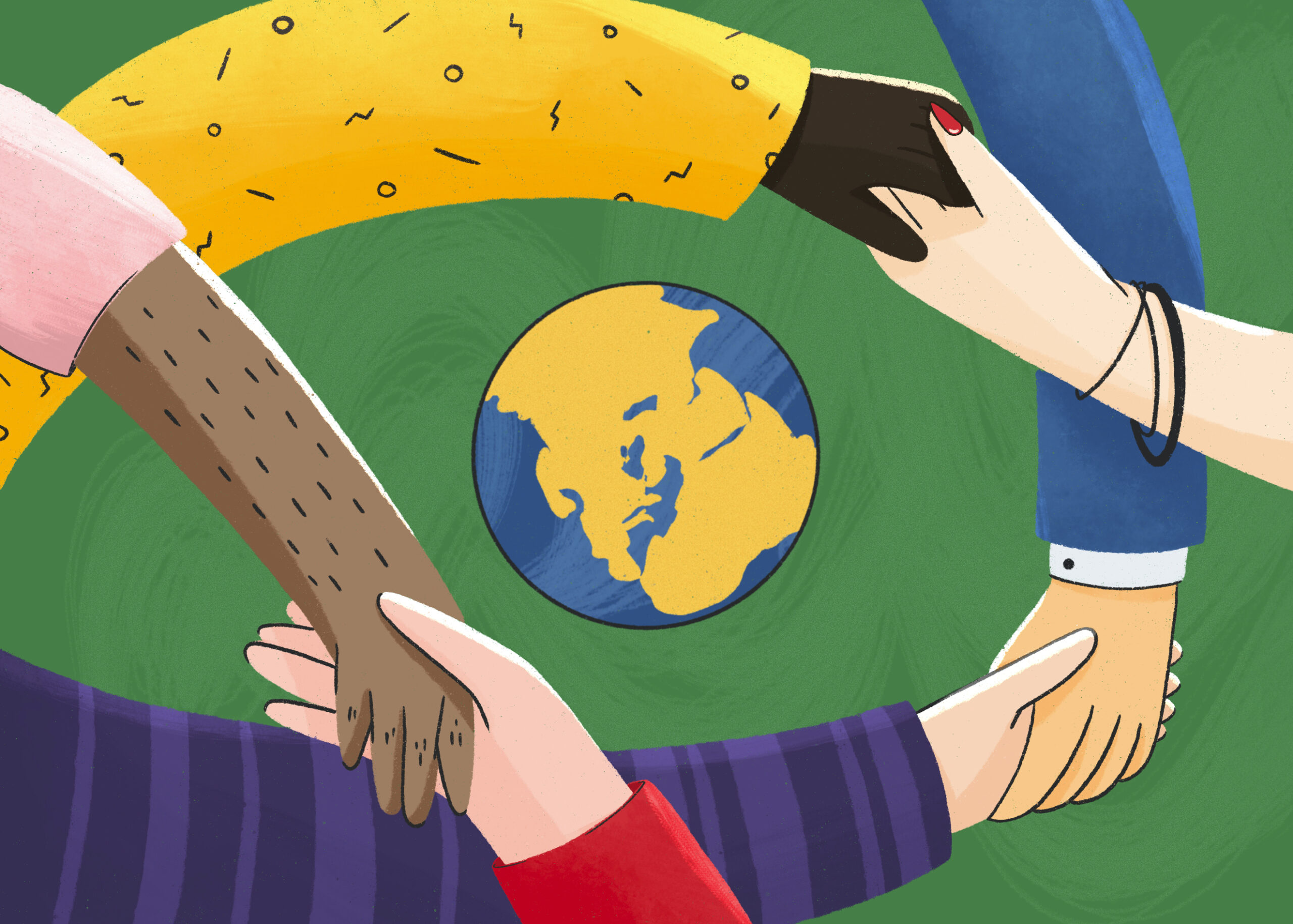 This illustration is by Alexandra Koleva for Fine Acts.

Ike Teuling is our Solidarity Officer for the Friends of the Earth Europe network based in Brussels. We talked to her to find out what the role entails, what it means to act in solidarity, and to get her take on European solidarity during the pandemic.

You’re International Solidarity Officer at Friends of the Earth Europe – what exactly does that involve?

Can you say more about what solidarity looks like, at the European and international level?

There are a lot of different ways of showing solidarity. Sometimes an act as simple as taking a picture with a solidarity message and putting this on social media can give activists on the other side of the world the important feeling that they are not alone in their struggle. When we send letters or visit embassies of a country violating the rights of our colleagues, this can have quite a strong impact directly inside governments and reach people in power who are unreachable for local organisations. In some cases, we decide as a federation to put even more effort into supporting our colleagues and something that started as a small solidarity action becomes an international campaign with the involvement of multiple member groups.

An online solidarity action for the Garifuna community in Honduras

Are there some particular cases or examples of solidarity that have touched you or you’d like to share?

Some weeks ago I had a conference call with colleagues from WALHI / Friends of the Earth  Indonesia, on the impact of the activities of Boskalis, a Dutch dredging company, on a fishing community in Makassar. The local WALHI office had invited fisherfolk to join the call and suddenly I was confronted with extremely touching stories from the local fishermen and women on how dredging by the Boskalis ship ‘Queen Of The Netherlands’ had impacted their lives dramatically. Neo-colonialism suddenly became a concrete thing. I was happy to be able to connect Milieudefensie / Friends of the Earth Netherlands colleagues to WALHI colleagues. We are now developing joint solidarity actions to support the fisherfolk and their community.

Solidarity has been talked about more since the Covid-19 hit, both in Friends of the Earth Europe and outside. Why is solidarity important in response to the pandemic?

The pandemic has shown that solidarity is a very human and natural thing. When the lockdown hit us, suddenly people all across Europe started supporting their neighbours and creating connections that normally wouldn’t have happened. Also on a government level, we saw that in lots of countries funds were being set up to support people who had lost their income. But of course, it also revealed a shocking lack of solidarity on some fronts with rich countries buying up all the vaccines, homeless people and migrants being deprived of healthcare, and an EU recovery package that was mainly beneficial for big companies.

Solidarity is a founding value of the European Union. Do you see it being enacted by the institutions?

Not really. On paper, the EU is a champion of solidarity and human rights but in practice, these words often turn out to be hollow. Last year we organised a few encounters between European institutions and our colleagues from Honduras, who were seeking justice for four disappeared Garifuna leaders. Garifuna is a community being threatened by various economic developments, including by companies with European ties. But these conversations have never led to any concrete action from the EU institutions.

What would you like to see the EU doing more or differently to live up to its stated value of solidarity?

As one of the richer parts of the world and with a history deeply rooted in the oppression of people and destruction of nature in other parts of the world, the EU has a huge responsibility when it comes to solidarity. First of all the EU should stand on the frontline, with deeds and not only with words, when it comes to protecting human and environmental rights defenders. Secondly, it should show deep solidarity with refugees and migrants who are often fleeing polluted environments, climate change or conflicts that have a root in colonialism or extractivism by European companies, instead of letting them die or live on the streets in its capitals. Third, it should organise radical solidarity within its own borders, with the richer countries supporting the poorer countries, and the rich elite and big business paying fair taxes to support those in need. Europe has a huge responsibility when it comes to solidarity.

I get to work with a lot of great groups in the Friends of the Earth network and create meaningful connections between the different groups and people. Of course in times of corona that has become more complex, with all travel being banned and everything happening online. I hope soon to be able again to meet you all in real life!

How can people get involved?

If you want to be kept up-to-date you can join the solidarity mailing list by sending me an e-mail: ike.teuling@foeeurope.org. This list is used to distribute calls for solidarity coming from our network. If there is a campaign or a specific case in your country that can benefit from Europe-wide or global support, you can always contact me to discuss how we can organise this.

This article was first written by FoE Europe and is being reproduced by FoE Malta.