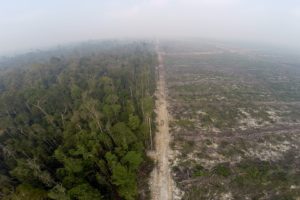 Friends of the Earth Malta has launched a petition under the European wide SUPPLY CHA!NGE project aimed at stopping abuse against nature and indigenous peoples in the supply chains of European businesses.

The SUPPLY CHA!NGE project has looked at the international industries supplying Europe with cheap agricultural raw materials from the global south, and found a multitude of abuses against the environment and indigenous people. The project also revealed that the palm oil supply chain is especially problematic, with indigenous people in South-East Asia seeing their traditional land rights ignored by companies that destroy their lands for the cultivation of palm oil. This palm oil is used to produce delicacies sold by retailers in Europe that we eat every day – which are especially popular around Christmas time.

A delegation of the SUPPLY CHA!NGE consortium went to Indonesia to speak with affected farmers, where stories of corruption and violence were revealed. In one case, a bupati (district leader) sold the communal forest to a company to plant palm oil without the knowledge of the villagers. In response, the villagers set fire to the company’s digger, seen as the symbol of the destruction of their forest. Two weeks later, two hundred policemen stormed the village, smashing windows and breaking down doors. Twenty men were arrested and were tortured in jail with cigarettes and beatings to make them confess to setting fire to the digger.

“Life has changed since the plantation company came to our land. Before, we could drink the water from our spring. We could gather fruit, rattan and wood in the forest, and eat our own vegetables. Today we have to buy everything in the shop, even the water,” said an anonymous woman from a village which is now almost completely encircled by palm oil plantations.

The European Union needs to implement mechanisms that hold companies accountable for what is happening in their supply chains. These mechanisms need to be binding if they are to have the desired impact.

”We are calling on the European Commission to support the initiative for a new binding United Nations Treaty on Business and Human Rights to regulate the operations of transnational corporations and to ensure environmental justice in countries of the global south,” said Martin Wildenberg from Global2000 (Austria), whose organisation played a leading role in the research.

Friends of the Earth Malta is appealing to Maltese consumers to also lend their support to this cause, as they too are contributing to environmental destruction and infringement of human rights by purchasing such products.

Petition can be found at: https://you.wemove.eu/campaigns/justice-for-my-cookies

An inspirational guide for the New Year

Be Active: Be Sustainable Malta.